In the Dip: Giving an idea away – Cell Phone Art

In the Dip: Giving an idea away – Cell Phone Art

I like to create things. I like to spin ideas and turn them into something. But last year, too many was too many. Some did not make it out of the Dip. Like this one: Cell Phone Art.

It’s still a great idea though and I am giving it to you if you want it. Including the stuff I already drew, bought or built. Of cource I started with a blog. Make sure you read the pieces about the artists youth and style. A dear friend wrote it, we had lots of fun. Then I bought old cell phones on ebay. People sell these in boxes. 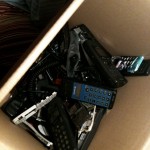 Before all that was one idea. Then there were more. Not a thousand, but about 1o. Enough to excite me.

What happened? Time was one issue. The pleasantry in the thought that I had a great idea, too.

But one of the key reasons to kill my work on it involves actually doing it. My wife sent me this great mathematical cartoon: “Modern Art = I could do that + but you didn’t” and I finally got of my butt. I also kind of had an agreement with someone to pay me a piece of tart for it. Ultimately I had to realize though that I was not good at any of the techniques involved. I compromised in paint, frame, binding and used what was there, not to mention that the actual craftmansship is poor. I would have to actually practice this (hopefully though not for 10,000 as Gladwell suggests), experiment and so on and so forth.

But I am already much better at playing guitar for example. And that is much more fun too. And I miss it. Way more. So please, you do Cell Phone Art. I haven’t seen it done. Take the first one, too, and redo it, make it better. 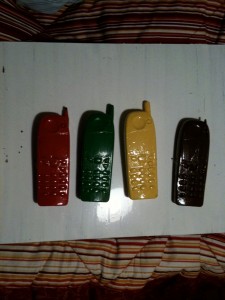 (This one is called ‘uh-oh’, consists of 4 Nokia 5110 phones and is supposed be a play on the Teletubbies. But my mixing skills resulted in brown instead of purble. See what I mean?)